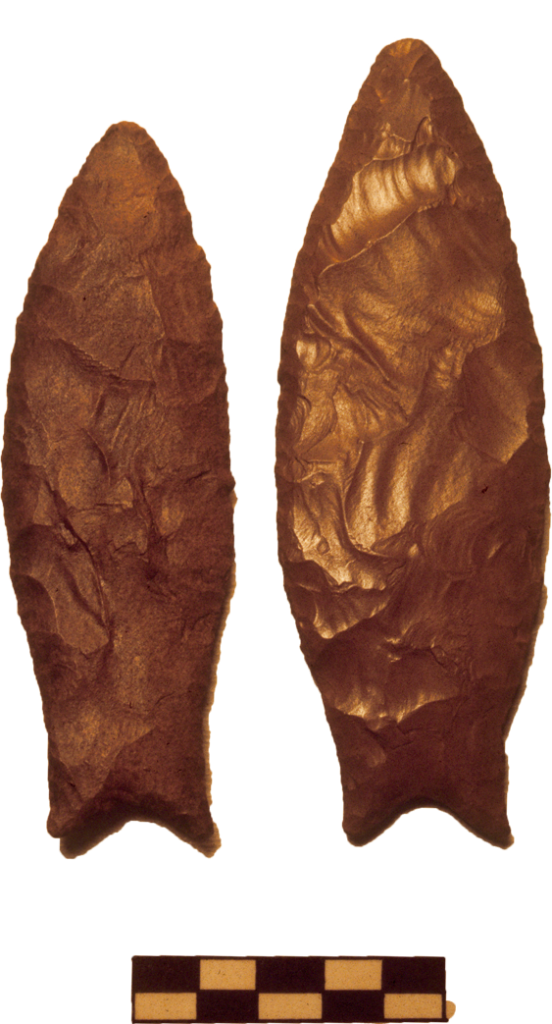 The earliest human settlements in the Apalachicola Valley are mostly clustered along the Chipola River, the largest tributary to the Apalachicola. The Chipola is today a beautiful clear blue stream with white limestone banks and many sinks and springs along its course. It might have been a line of sinkholes much like the Aucilla and other Florida rivers during the Pleistocene (Ice Age). This would have provided a dependable water source for the first people to arrive, probably sometime before 13,000 years ago. These folks were probably organized in small societies of related families who moved seasonally to obtain whatever resources were available. With so little evidence, we cannot say much about their social systems or religious beliefs. Certainly there was a division of labor based on age (it is hard to hunt a mammoth when you are a little kid) but there did not necessarily have to be a division of labor based on gender (it is hard to hunt a mammoth when you are a 100- or 200-pound creature with a spear, no matter who you are!). Probably in most families everyone worked to obtain needed resources (even kids can pick up turtles or nuts). And probably it was hard work but not constant. Anthropologists have documented how most foraging cultures spend only a few days a week making a living and relax the rest of the time!

During the Pleistocene, water from the oceans was taken up to make the ice of the glaciers that formed on top the northern part of the continent. Though Florida was not covered with ice, it was much wider, since sea levels were hundreds of feet lower. The climate was cold and dry, and there were Pleistocene megafauna (ok, Ice-Age big animals!) of many now-extinct species, including bison, mastodon, and mammoth. 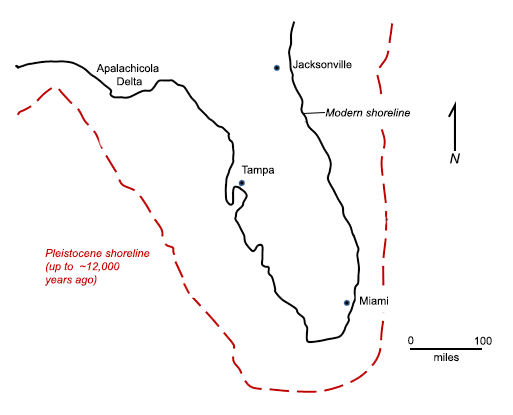 The traditional view of the first Americans was that they all made big spear points to hunt this big game, and that they must have been meat eaters all the time. There is no doubt that they made those points, which are more accurately called projectile points (NOT arrowheads, as the bow and arrow were not introduced till much later). But they probably got more reliable food from small game, fish and turtles, and plants – all of which are also less risky to obtain.

The evidence of Paleo-Indian activity is sparse along the main river channel of the Apalachicola and lower Chattahoochee, but much has come from the waters and banks of the Chipola. The diagnostic artifacts are the fluted and fish-tailed lanceolate points, markers of these first peoples. A few finds of such points from lower-valley and barrier-island sites indicate settlement was probably widespread everywhere, but has been mostly covered by river deposits as the delta formed, and inundated with rising sea level after the end of the Pleistocene.

Such points from Florida are very similar to a type found in South America with their waisted, narrow bases. Stone artifacts recovered from the river tend to have a very dark purple patina which turns black after being exposed to air, while those from terrestrial sites are of the usual weathered, whitish chert (American flint). Other artifacts from this time period include scrapers and other kinds of chipped stone tools. There are also artifacts of bone and ivory, such as spear foreshafts and points. Coastal sites that might have existed at this time are much harder to find, as they were drowned when sea level rose after the Pleistocene. However, east of the Apalachicola valley, archaeologist Mike Faught has found evidence underwater out in the Gulf in Apalachee Bay of Paleo-Indian occupation near drowned springs (Faught 2004).

Many people have shared their collections and information on artifacts from the Chipola valley, and this is appreciated because the science of archaeology can only learn as more and more data are accumulated. HOWEVER, PLEASE REMEMBER THAT TODAY IT IS ILLEGAL TO TAKE ARTIFACTS FROM FLORIDA RIVER BOTTOMS AND PUBLIC LANDS. Yes, it is regrettable that the state policy has changed on this matter, and maybe a coalition of divers, archaeologists, and others can help to change things again in the future, so that avocationals and professionals can share information.

A USF M.A. thesis by Dan Tyler documented many of the collections of Paleo-Indian materials in the Chipola valley.

To keep reading about the archaeology of the Apalachicola River valley in chronological order, continue to the Archaic page.