During the Woodland period throughout the eastern U.S. people began a slow process of producing some of their own foods in gardens and actually domesticating some of the native species like squash and sunflower. They also began building burial mounds for the honored dead, and including elaborate grave goods that can tell archaeologists something about ceremony and status. Sometimes mounds were accompanied by other massive earthworks such as walls or berms. But much of the rest of life continued as it was during the Archaic, with hunting of deer and small mammals, turtles, fish, and gathering shellfish, nuts, acorns, fruits and berries. Pottery, an important time marker, becomes tempered with sand, grit, and grog (crushed probably already-fired clay) but not fiber any more.

This time period is characterized by Deptford pottery, which was plain-surfaced or stamped with a parallel-line design (simple-stamped) into the wet clay before firing. Other diagnostic Deptford ceramics are fabric-marked (woven cloth or mat impressions). Also at this time people began making check-stamped vessels, stamped with a roller or a paddle carved in a checkerboard design. Check-stamped sherds are less diagnostic since people of most succeeding time periods also made them. Later in the Early Woodland, carved paddles with complicated curvilinear and rectilinear designs were used to stamp the earliest Swift Creek type pottery. Early Woodland sites occur all along the interior valley, on the main river and tributary streams, and on the coast. So far we have only a few hints of the beginnings of mound building at this time, at Pierce Mounds at the river mouth, and at Chattahoochee Landing, just below the confluence on the Florida/Georgia border.

The Middle Woodland is the height of the mound-building period, but also there are many domestic sites known. You can read about USF excavations at a Middle Woodland camp in this article on the Overgrown Road site. People were making beautiful complicated-stamped pottery, often to bury with the dead in the mounds. Swift Creek ceramics were stamped with elaborate designs, which may have been merely decorative, or may have had deeper meanings that we do not yet understand. Efforts are underway to characterize all the designs, name them and see where they occur across the South. Another pottery series during the Middle Woodland was the famous Weeden Island complex, with elaborate incised, punctated and cutout designs. Punctate, or punctated, is a decoration style composed of a series of dots made by poking holes into wet unfired clay with a thin or pointed implement, like a twig or an animal tooth. Though Weeden Island pottery first occurs slightly later than Swift Creek pottery, both are present at nearly all the Middle Woodland sites in the valley, whether habitation areas or burial mounds. 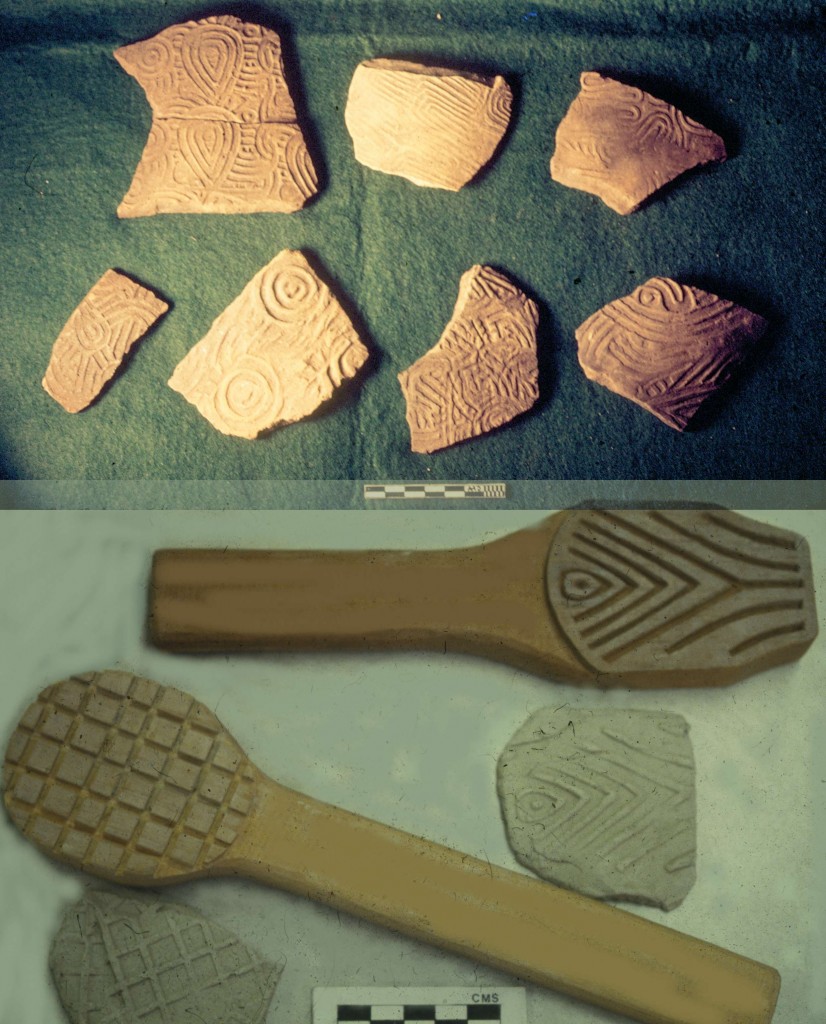 Several Middle Woodland mounds have been investigated since the turn of the century along the Apalachicola and Chattahoochee Rivers by such famous archaeologists as C. B. Moore and Gordon Willey. The religious beliefs of the people apparently required burial of important folks in mounds that were built up in stages, with graves containing many artifacts. Such grave goods could be everyday items such as plain pots, but also included were fancy vessels and ceremonial objects of exotic materials such as copper, shell, mica and other shiny stone, and even galena (a shiny lead ore). Different treatments of individuals as shown in burial methods and grave goods may indicate different social statuses of different individuals. But social status differentiation may not be the same as economic status. 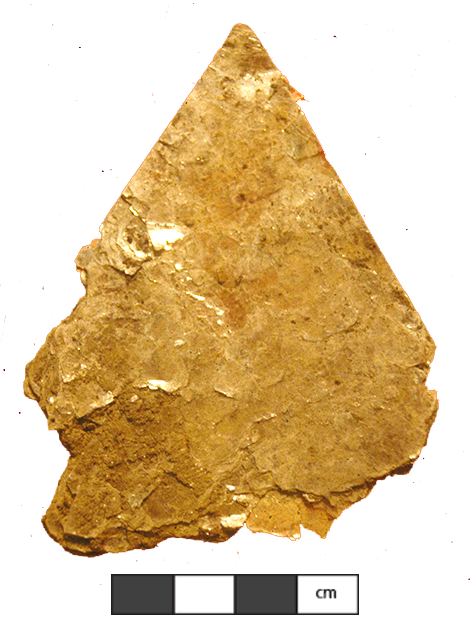 Many years of work at a major mound center, Pierce Mounds, in Apalachicola (privately owned) have been conducted by USF. Check out the documentary below, made by Nancy White and Eric Prendergast, to learn more about this fascinating mound center. The documentary, as well as much of the research at Pierce in general, has been supported by the current landowner, George Mahr.

Most Middle Woodland mounds are gone, plowed away or otherwise destroyed. Recent investigation of a bulldozed  mound on St. Joseph Bay produced some ceramics and other interesting information.

The Otis Hare site is a Middle Woodland camp site in the middle valley near Bristol where University of South Florida archaeologists, with the support of the Florida Humanities Council, conducted excavations as part of an archaeological field school. In the tradition of the department’s Public Archaeology program this project was open to the public, both young and old. Radiocarbon dates from charcoal at the site date its earliest occupation to A. D. 420. Ceramics recovered included Keith Incised, Carabelle Punctate, Swift Creek Complicated-Stamped, and net-marked. Other items included mica, cut into the shape of an arrowhead, and coprolites (dried feces). Mica is a rock not native to Florida, which would have had to be brought from north Georgia. The coprolites were examined by Elizabeth Wing at the Florida Museum of Natural History, and found to be either of dog or human origin. They were full of chewed-up fish heads! Other animal remains identified by FMNH zooarchaeologists included the freshwater shellfish, river fish, turtle, and mammal remains from animals that were certainly obtained for food. A duck bone, as well as charred plant remains identified by the ethnobotanist as persimmon fruit, suggest people lived here in the fall, when these species are available. This also makes sense because fall is a time of low water; people who stayed on the riverbank during the winter or early spring high-water season might have been flooded out of their camps. 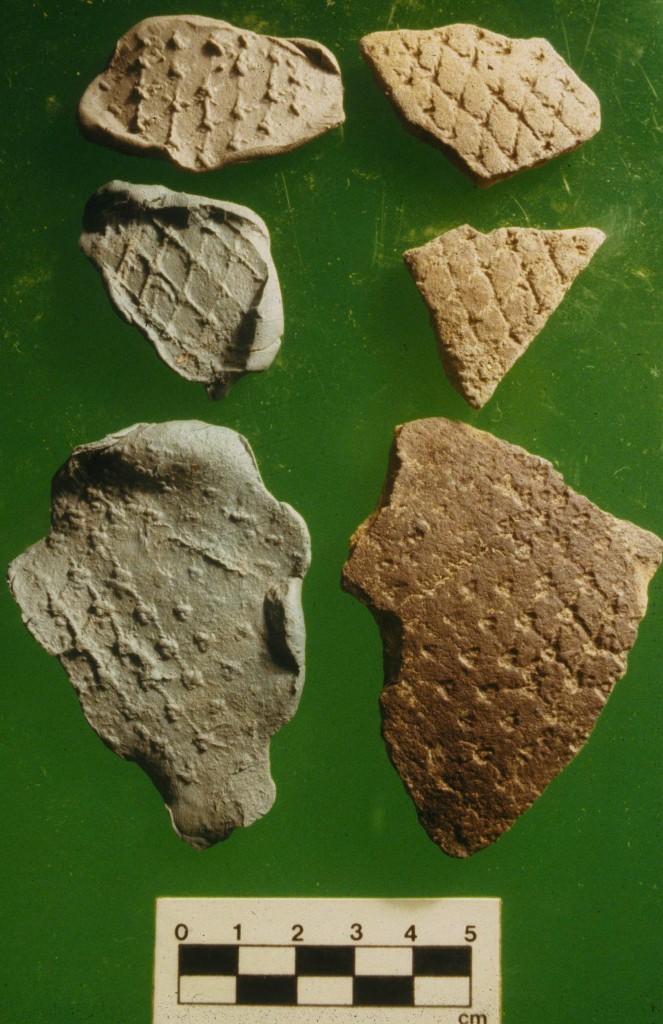 Net-marked sherds from the Woodland Component at 8Li172; positive impression of nets in modeling clay shown at left

So far we have not found any remains of domesticated plants in Middle Woodland sites in this region, but experimentation with them was probably going on along the river, on the fertile soils annually renewed by flood deposits. On the coast and estuarine areas people continued to fish and collect shellfish, building their middens (garbage piles) into big shell mounds that were high dry places to live within the swamp. Most of the freshwater shell middens are packed with the bones of many fish as well, especially gar. Today this fish is not often eaten, because it is bony and hard to clean. They probably show up in shell mounds because they are easy to catch in shallow waters.

Two famous (and still unpublished) papers about Woodland ceramics, subsistence, and ceremonialism in this region were written by David Brose and George Percy, who have given their permission to make them available on this website (thanks, Dave and George!). Weeden Island Ecology, Subsistence, and Village Life (Percy & Brose1974) and Weeden Island Ceremonialism (Brose & Percy 1974).

In this valley, the Late Woodland period is characterized by late Weeden Island ceramics. The types Weeden Island Incised and Punctated and Zoned Red disappear, and most sites have check-stamped and plain sherds, possibly with a few Keith Incised and Carrabelle Incised or Punctated (types which hang on a little longer). Some archaeologists think check-stamped ceramics alone can be diagnostic of the Late Woodland period, but this is incorrect (see discussion of check-stamped pottery in Marrinan and White 2007). Most check-stamped sherds are of indeterminate types and can date from any time within the last 3,000 years. 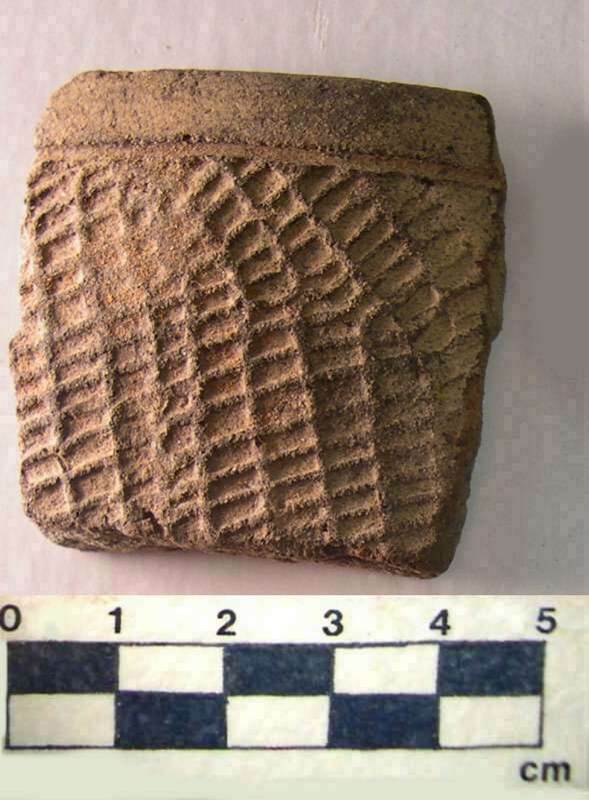 Sometime before A.D. 1000, a new plant made its way into the southeastern U.S.: corn (we call it maize). This species of grass (yes) had been so domesticated (genetically engineered) by Mesoamerican natives over thousands of years that its seed head became huge (the cob) and it could not even reseed itself, requiring humans to tear off the encasing husk. Corn may have entered the South from the Southwest, or around the Gulf, or in some other fashion, and investigations now include examining the genetic makeup of several strains. But we know people were at least planting a little of it in gardens by the Late Woodland period. Curiously, they also just about stopped building burial mounds and making much fancy pottery at this time. Possibly the group energy was more often expended in the expanding process of food production, since it is always MORE work to plant crops than to gather them wild. Besides gardening, however, people were still collecting wild resources. We do not know much about their sociopolitical and economic systems yet in order to say whether real economic differentiation was emerging (resulting in richer or poorer, powerful or powerless).

Next stop: the valley’s first intensive corn farmers and flat-topped temple mounds of the Mississippian.